Home » News » #LiterallyWhatsHot: I Don’t Hide My Scars by Beauty is a Compelling Read that Stirred Up a Range of Intense Emotions

#LiterallyWhatsHot: I Don’t Hide My Scars by Beauty is a Compelling Read that Stirred Up a Range of Intense Emotions

I have just finished the anonymously written “I don’t hide my scars”, and I am shaking. Beauty, the pseudonym for whoever wrote the book, is a heroine the equal of any you will find in the history books. I am actually trembling as I write this.

Not from fear, though, it is not a horror novel. Not in the sense you would think. There is something to be said for fear though, after reading it, that makes one afraid of things that, quite frankly, many of us are unaware of, a side of life I hope is extremely rare.

Beauty’s life, short as it has been, from her narrative, is something of great promise and impact, judging from the many attempts that have been made to end it. from the deeply hypocritical mother, to the inhuman, sorry excuse for a father, beauty might as well have not been born to them. But born she was, and thereafter, the horror story that her life has been kicked off in earnest. From being forced to fend for herself at an early age, to becoming a kind of mother to her younger ones while still herself a child, to all the torture and indignities the young woman had to endure, the repeated rapes from the children and husband of her “Aunty”, her story is eerily  like the story of the Biblical Job, in  that she barely exits one stage of suffering before another begins to claw at her with long, dirty fingers.

Particularly savage is the part about the Madam who took her from her parents to work as a stripper and prostitute. It is painful that that kind of ring would be run , not by a man, but by a woman just like them, a woman who collected hefty sums from known and strange men to do known and strange things to children that were the same age, if not younger, than her own biological children, if she indeed had any.

From working with labourers and carrying “kpom-kpom” with them, to selling bread and beans to the same working men at break time, Beauty suffered the kind of life that no child should ever be made to go through. Labourer, video vixen, trader, demon-possessed girl, and everything else she has been, the story of Beauty sounds almost unbelievable, because we, secure in our little houses and compounds and sitting in smart cars or public transport, would prefer not to believe that such a world exists.

This just goes to show us how flawed and ugly our humanity is. And let us not even start on the state of our nation. No welfare schemes, no decent orphanages and homes for wards of the state or children rescued from the streets (or from destructive parents, like Beauty and her siblings would have been). It gets worse because for every Beauty telling her tale, there are others, their acts of valour unsung, they are the heroines in tattered slippers and worn, ragged clothes, braving the dangers of speeding vehicles and prowling rapists to sell things for madams. Or mothers.

Beauty’s story is harrowing, heartbreaking, but it has a good end. My sincere prayer for her is that she gets better and better, and those crooks she could not name for fear of exposing herself, that karma finds them, and all the other little girls are rescued and brought, if not home, then to homes. It is a conscious, sobering book, but well worth every penny. If a physical book is ever printed, I intend to get two: one for myself, and one for someone I don’t even know yet.

You can get a copy of  “I Don’t Hide My Scars” on Okadabooks. Click here: 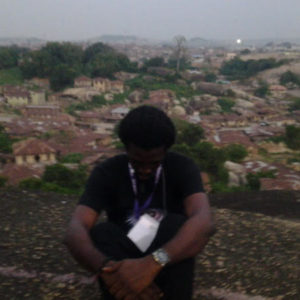 Eye Kay Nwaogu is a writer, born in Nigeria, brought up all over the place, and chasing his dreams. He writes nonfiction, book and music reviews. But when he is writing fiction, his heart sings loudest. He is a lover of travel and food, and when he is not writing, he is seriously thinking of what to write, or read.