2018 is the year black women are taking power

(CNN)In her speech after winning the Democratic primary Tuesday night, Georgia gubernatorial candidate Stacey Abrams expressed a bone-deep understanding of the political moment that so many black women have already grasped — first in private conversations between one another and now, increasingly, with the Democratic power structure that has struggled to see black women as the capable, ready leaders they are. 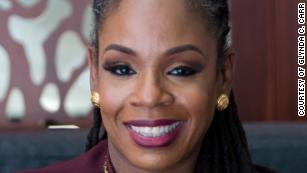 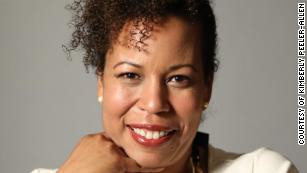 Kimberly Peeler-Allen
“… We were born for a time such as this,” Abrams said, quoting a verse from the Book of Esther. “And now is a time to defend our values and protect the vulnerable — to stand in the gap and lead the way.”
Black women have been leading in this country for centuries as abolitionists, voting rights advocates, college founders, civil rights defenders, labor leaders, entrepreneurs and more. Yet far too often, when they express political aspirations and turn to established institutions for support, they are met with resistance and told their brand of politics doesn’t have mass appeal.
But Abrams’ victory this week makes clear what can happen when black women candidates are afforded support based on their track records, qualifications and policies instead of their skin color.
Fifty years after Shirley Chisholm’s historic run — and win — as the first black woman elected to Congress, Abrams, who received 76% of the Democratic primary vote, is now positioned potentially to become the first black woman to serve as a US governor.
Her distinctive achievement speaks volumes about changing voter demographics and the path to leadership that is emerging in this country. Even in red states, voters are becoming brownerand less conservative. Abrams’ victory — as stunning as it may appear to some — was wholly predictable and part of an emerging pattern: Black women are seizing on this shift and delivering critical wins to progressives as organizers and voters in states such as Virginia and Alabama — and now as candidates in places such as Georgia and Illinois. 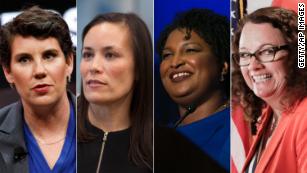 Women score big in Southern primaries 01:03
Abrams isn’t alone in her bid to hold political office in places long believed off-limits to black women.
Lucy McBath, an activist who lost her son to gun violence, will be on the ballot. She was the only woman and person of color among the contenders who vied Tuesday to become the Democratic Party candidate for Georgia’s 6th Congressional District. McBath came in first in a crowded field, but she will have to face a primary runoff in July. If she wins, she’ll be angling to represent a largely white district.
Similarly, in March, Lauren Underwood — who was a senior health policy adviser during the Obama administration — took home 57% of the open primary vote in Illinois, beating out six white male candidates who also ran to represent the state’s largely white and affluent 14th Congressional District.
And Stephany Rose Spaulding, a Baptist pastor and faculty member at the University of Colorado, Colorado Springs, who aims to unseat a six-term incumbent, will be on the ballot for Colorado’s 5th Congressional District
In other places around the country, black women who already hold office or have served as key political advisers are poised for elevation into the realm of political firsts.
In San Francisco, Board of Supervisors President London Breed — who has held the city’s second-highest elected office since 2012 — is a front-runner in the June 5 mayoral special election to replace deceased former Mayor Ed Lee.
And in New York, Letitia James, who as public advocate holds the city’s second-highest elected office, and Leecia Eve, a former aide to both Hillary Clinton and New York Gov. Andrew Cuomo, have both declared their plans to run for state attorney general after Eric Schneiderman resigned following accusations of sexual misconduct and abuse. 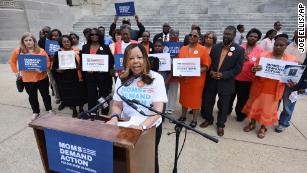 Mom of slain teen: ‘There’s no justice yet’ 01:59
Each of these women has the kind of experience to represent the people effectively, and they are prepared, as Abrams said, to stand in the gap and lead the way. They are ready to implement policies and pass legislation to address — to fix — some of our country’s most intractable problems, including inadequate wages, unequal education, gun violence and health care disparities.
These issues affect too many Americans, regardless of race, age and geographic location.
2018 is shaping up to be the year that black women break through and change the face of political leadership in this country. Progressive institutions and power brokers have a unique chance to bring about this shift and give Americans elected officials who won’t leave behind any individuals.
We all must commit to not having any regrets on the morning of November 7 because we didn’t put the proper resources behind this talented field of candidates.
Black women have proven themselves at the polls, on the trail, in office and behind the scenes of democracy — now it’s time to vote, volunteer and donate to support black women who are prepared to lead this country boldly into the future.
Source: edition.cnn.com
Share on facebook
Share on twitter
Share on pinterest
Share on linkedin
Share on whatsapp
Share on email
Share on print
PrevPrevious“I Try To Tell a Story Through Fashion & the Woman” Claire Idera Talks to BN About Life as a Fashion Illustrator in Modern Nigeria
NextAs a black woman, I hate the term ‘people of colour’Next