Home » News » Grass to Grace:From A shepherd Girl In Morocco To The Minister Of Education Of France, Meet Najat Belkacem.

Grass to Grace:From A shepherd Girl In Morocco To The Minister Of Education Of France, Meet Najat Belkacem.

Najat Belkacem is the first woman and the youngest person  at age 36 to ever make French Minister of Education.

While some are too busy shouting ‪ban migrants‬, Najat Belkacem quietly reminds us that immigrants are an asset, and that believing in our children and investing in them with the right character traits and the right education literally means the sky is the limit.

For the record, Najat became determined to succeed in politics when she observed the rise of Le Pen and the right wing in France.

She recalls how at her first fundraiser – as she welcomed guests in and took their coats many mistook her for the house maid. Today, she’s called “The New Face of France.” and a record setter.

Najat Vallaud-Belkacem (born Najat Belkacem on 4 October 1977) is a French socialist politician, who on 25 August 2014 was the first French woman to be appointed Minister of Education, Higher Education, and Research, joining the second Valls government. 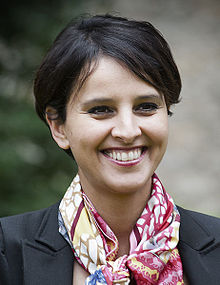 She was the spokesperson of Ségolène Royal’s campaign during the 2007 French presidential election and again in 2009 for the 2011 French Socialist Party presidential primary. Since 2008, she has been a councillor of the city of Lyon, responsible for major events, youth and community life.

Second in a family of seven children, Najat Belkacem was born in the Moroccan countryside in 1977 in Bni Chiker, a village near Nador in the Rif region. Her grandmothers were respectively Spanish and Algerian. In 1982 she joined her father, a building worker, with her mother and elder sister Fatiha, and grew up in the suburbs of Amiens. She graduated from the Institut d’études politiques de Paris (Paris Institute of Political Studies) in 2002. At the Institut she met Boris Vallaud, whom she married on 27 August 2005.

She joined the Socialist Party in 2002 and the team of Lyon mayor Gérard Collomb in 2003, leading actions to strengthen local democracy, the fight against discrimination, promotion of citizen rights, and access to employment and housing.

Elected to the Regional Council of Rhone-Alpes in 2004, she chaired the Culture Commission, resigning in 2008. In 2005, she became adviser to the Socialist Party. In 2005 and 2006 she was a columnist for the cultural programme C’est tout vu on Télé Lyon Municipalealongside Stéphane Cayrol.

In February 2007 she joined Ségolène Royal’s campaign team as a spokeswoman, alongside Vincent Peillon and Arnaud Montebourg.

In March 2008 she was elected conseillère générale of the Rhône department in the cantonal elections with 58.52% of the votes in the second round, under the banner of the Socialist Party in the canton of Lyon-XIII.

On 16 May 2012, she was appointed to French President François Hollande’s cabinet as Minister of Women’s Rights and spokeswoman for the government.

She supports having the French government force Twitter to filter out hate speech that is illegal under French law, such as speech that is homophobic. Regarding same-sex marriage in France, she has stated that its legalisation is a matter of “historic progress”.