The 800-mile round trip will support women and girls living in poverty.

“There’s a rather huge pile of bras in my spare room,” explains Emma Sinclair, a tech entrepreneur from London who is travelling 400 miles to Edinburgh on Friday to hand-deliver more than one hundred of the items to a local charity.

Sinclair will be joined on the unusual trip by two friends Loose Women’s Stacey Soloman and journalist and broadcaster Harriet Minter. Their destination? Smalls For All, an Edinburgh-based charity that distributes underwear to women and girls in Africa.

The organisation helps vulnerable women living in orphanages, slums, IDP camps and schools, as well as providing underwear to hospitals to help those suffering from medical conditions like obstetric fistula.

Founder and CEO of Smalls For All, Maria Macnamara, says the new and unworn bras (and knickers) make a “huge difference” to women and children in Africa who don’t have the money to access these everyday items. “Not having underwear can mean young girls miss days off school each month,” she says.

This isn’t the first time Sinclair has found herself with a mountain of others’ bras in her flat. Several months ago she started collecting donations from women on Twitter in aid of her friends’ charity Love Support Unite, which works to break the cycle of poverty in Malawi.

“People are so incredible and generous. Women who saw the tweet and took time out of their day to send worn and new bras to us,” says Sinclair.

Several suitcases packed with donated items were sent overseas, but when one bag got lost in transit and returned to Sinclair’s home address in London, she found herself once again with a spare bedroom full of underwear that needed a good home. 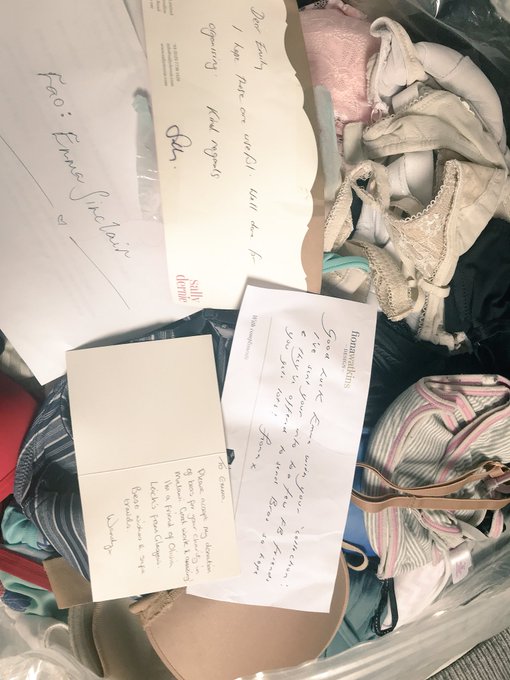 Determined not to be defeated, she took matters into her own hands. Having located an Edinburgh-based charity on a similar mission to donate underwear to women in Africa, a road trip plan was hatched.

The team are scheduled to set off on Friday and return on Saturday, all motivated by the women who will have their lives changed by the donations. Sinclair says simply: “Given a lot of communities cannot afford food and education, as you can imagine, supportive underwear is low on the list.”

“They [bras] are hugely important as a status symbol which at the one end gives confidence (to girls at school in mixed classrooms) and at the other end of the spectrum, purportedly reduce attacks and rapes on women. I hear this everywhere I go in Africa,” says Sinclair.

“When a woman looks poor and has no underwear she is a much easier target for harassment,” she explains. “To give young girls and women who cannot afford a bra, one to call their own.”

“Imagine being a young woman at school and the indignity of not being properly dressed and supported. This aids with confidence and mobility,” she adds.

Sinclair, who is also a UNICEF business mentor and advisor, comes from a family of volunteers: her dad founded a lunch 27 years ago to raise money for the Variety Children’s Charity. It is now their single largest fundraiser every year, gathering between £250,000 to £400,000 at a single meal.