Home » News » One Year After the Earthquake: How Nepal Is Being Rebuilt—by Women and Girls

One Year After the Earthquake: How Nepal Is Being Rebuilt—by Women and Girls

I happened to be in Kathmandu when the 7.8 magnitude earthquake hit. It was Saturday, April 25, 2015, and I was in the city with my friends. We were staying in a hotel, which was two minutes away from Dharahara, a monumental tower that we had plans to climb later that day.

All of a sudden, everything started to tremble. The land underneath my feet was shaking. People around me started to panic and shout, “Earthquake! Earthquake!” Without thinking, I ran out of the building, barefoot. My friends were also shouting and screaming—it took a while to understand what was even happening. The Dharahara tower broke off into pieces in front of us. We ran into the thick blanket of air created from dust as homes fell apart all around us. 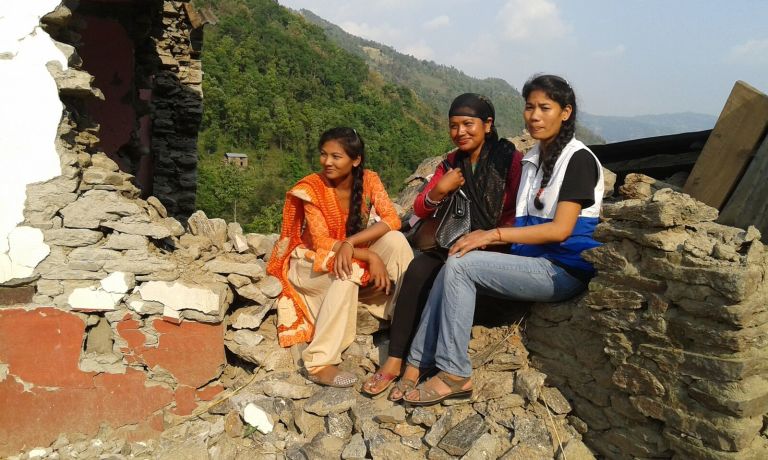 The author (right) and friends surrounded by the ruins of the earthquake
Courtesy of Plan International
The chaos that followed the earthquake affected adolescent girls and women immensely. While everyone was impacted by the natural disaster, the female Nepalese population faced immediate problems of security, sexual violence, and no access to menstrual products.
THE GIRLS SEEMED MORE FEARLESS THAN THE BOYS.

Tudikhel, one of the only open spaces in the city, seemed safe for everyone. It was filled with people, but there were no secure, private spaces for females. An absence of accessible toilets, sanitary pads, and changing areas was distressing for women and young girls—suddenly without resources and basic safety in the face of a national disaster. These issues  went unnoticed for days as we were facing higher risks than ever before. I’ll always remember the moment when I gave my handkerchief to a friend to use as a sanitary pad. 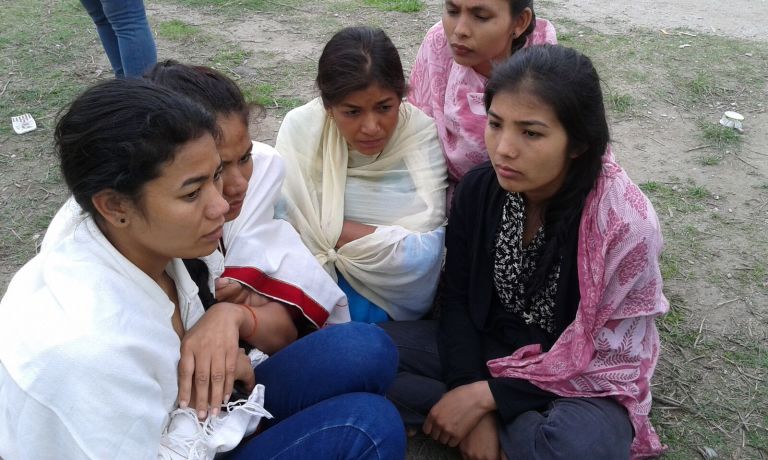 One week later, I returned to my village in the Terai region. My home was not affected badly, so my friends and I decided to travel to help Sindupalchowk, a district that was near the epicenter of the earthquake: It was one of the hardest hit areas. More than 3,000 people died there. We took rice, pulse (beans), and one hundred blankets, offered from international sponsors to those in need.

Many, many people had lost their families in the earthquake. People were sleeping under the open sky and we heard about stories of rape among the survivors.

I’LL ALWAYS REMEMBER THE MOMENT WHEN I GAVE MY HANDKERCHIEF TO A FRIEND TO USE AS A SANITARY PAD.

Despite the massive hardship though, women were boldly stepping up to help and support the numerous people in need. Of their own volition, many women formed groups and volunteered their time to find resources for their communities. Women who survived the earthquake suddenly became the heads of their households, with the sole responsibility of caring for their children and procuring capital. Girls bravely stepped into leadership roles, playing an influential role in organizing emergency relief for their families and neighbors.

As I watched the Nepalese response to this national crisis, I soon realized: The girls seemed more fearless than the boys. 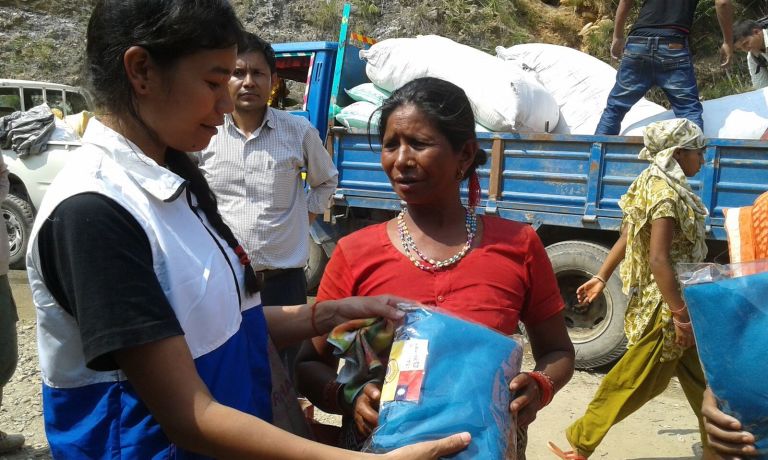 During the emergency phase, we did not observe the Teej festival—a festival that celebrates girls and women in Nepal, otherwise known as the “festival of sisterhood.” We saved the money that we had been saving—the equivalent of about $100 USD—and donated those funds to survivors of the earthquake.

My friends and I, other former Kamalaris, eventually received about 500 U.S. dollars from a youth foundation, which we then handed over to the local government to continue supporting the relief effort.

As Nepal continues to recover, it’s because women like us, both young and old, organized, came together, and rebuilt our country.