The six white men who abducted her and terrorised her in 1944 never faced jail and the state of Alabama only apologised for this in 2011 – a testament to the the racism that continues to blight policing in America, and justice for black people

“I can’t help but tell the truth of what they done to me,” says Recy Taylor, in the documentary of her life released last year, The Rape of Recy Taylor.

Taylor was born Recy (pronounced ree-see) Corbitt in Abbeville, Alabama, to a family of African American sharecroppers. From the age of 17, after the death of her mother, she helped her father Benny Corbitt raise her six younger siblings.

She later married Willie Guy Taylor and had a daughter of her own, Joyce Lee. Willie Taylor was at home with their daughter on the night of 3 September, 1944, when Taylor accompanied her friend Fanny Daniel and Daniel’s son West to the Rock Hill Holiness Church.

As they walked home, they were stopped by seven young men in a green Chevy. The young men forced Taylor into their car at gunpoint before taking her to a patch of trees where she was blindfolded, stripped and raped by six of her kidnappers.

The events of that night were to change not only Taylor’s life but the course of the civil rights movement. Though her attackers had threatened her with death, Taylor did not keep quiet. She reported her rape. Daniels and her son, who had reported the kidnapping as soon as it happened, identified the car and six of the men inside it. However none of the rapists – who were all white – were called in.

The case came to the attention of the National Association for Advancement of Coloured People (NAACP) which sent its best investigator, Rosa Parks, to take Taylor’s testimony. Parks was instrumental in ensuring the case came to trial in October 1944.

An all-white, all-male jury dismissed the case after five minutes of deliberation but Parks was not to be put off. With her fellow activists, she continued to lobby Alabama governor Chauncey Sparks until he agreed to another investigation.

Parks set up the Committee for Equal Justice for Mrs Recy Taylor, drawing support from all over America. She also drew the attention of the FBI, which argued that the committee was a cover-up for the Communist Party.

There was a second trial on 14 February 1945, but for the second time, an all-white, all-male jury failed to indict Taylor’s rapists, despite their having admitted to the attack and trying to pay off Taylor’s husband. Willie Guy Taylor reported the suspects’ lawyer as having asked him in the crudest terms about an out-of-court settlement: “N***** ain’t $600 enough for raping your wife?” 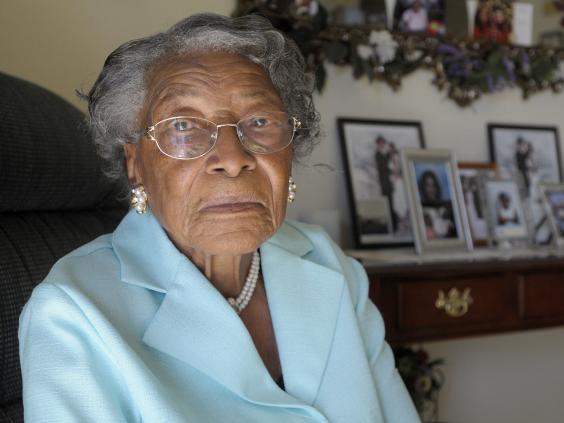 Taylor’s torment was endless. Her home was fire-bombed, forcing her to move with her family into her father’s house. She received countless death threats from white supremacists. Her father Benny Corbitt took to spending nights up a tree in the garden with a gun, to protect his daughter as she slept.

She continued to live with her family for 25 years after the attack – largely housebound by fear – before moving to Florida. In the years that followed, she was dogged by more tragedy. Her marriage ended and her only daughter was killed in a car crash. She stayed in Florida until ill health brought her back to her family in Alabama again.

Taylor’s attackers were never convicted but her plight was one of the catalysts for the 1955-56 Montgomery Bus Boycott that would make Rosa Parks a household name across the world. Finally, as recently as 2011, Taylor received a long-overdue apology from the Alabama State Legislature “for its failure to prosecute her attackers”.

The news came on Mother’s Day, as Taylor visited the Rock Hill Holiness Church once again. Asked what it felt like to get an apology at last, she said: “I felt good. That was a good day to present it to me. I wasn’t expecting that.”

Speaking of that day, historian Danielle McGuire – author of At the Dark End of the Street: Black Women, Rape, and Resistance – said: “I know for her that that meant a whole lot. It wasn’t justice, it wasn’t her assailants being convicted of a horrible crime and going to jail. But it meant something. For the first time the governor of Alabama had to say her name and had to be honest about the way in which the state tried to bury her story, refused to investigate it, refused to listen to her. So it was a kind of reckoning – it was powerful.”

Nancy Buirski, director of The Rape of Recy Taylor said: “It is Recy Taylor and rare other black women like her who spoke up first when danger was greatest. It is these strong women’s voices of the Forties and early Fifties and their efforts to take back their bodies that led to the Montgomery Bus Boycott and other movements that followed, notably the one we are witnessing today.”

Indeed, Taylor’s memory was invoked in the context of #MeToo by Oprah Winfrey as she accepted the Cecil B DeMille award at the Golden Globes last week.

“I just hope that Recy Taylor died knowing that her truth – like the truth of so many other women who were tormented in those years, and even now tormented – goes marching on,” she said.

Throughout her life, Taylor was sustained by her faith. Remembering her friend, Danielle McGuire said: “She was funny, witty. She was a churchgoer. She loved going to church. She loved to sing. She was very welcoming.”

Reflecting on her ordeal on an NPR radio show in February 2011, Taylor said: “I like to live happy… I sometimes don’t even think about it. I go along. And then again, I get to thinking – I said, ‘Lord, they could’ve killed me anyway’… but the Lord was just with me that night.”

Taylor is survived by two sisters, a granddaughter and several great-grandchildren.