Home » News » Ruth Negga: ‘I never fitted anywhere – in life or in Hollywood’

Ruth Negga: ‘I never fitted anywhere – in life or in Hollywood’

On a bright winter morning, actor Ruth Negga sits in the corner of a Soho restaurant, arms folded over a jumper on which two embroidered swifts are wheeling across a grey sky. Although she had small parts in 12 Years a Slave and World War Z, and recurring ones in Misfits and Marvel’s Agents of SHIELD, she enjoys relative anonymity. This time next year – after the release of a film (Loving) that has already been named a contender for the Oscars, as well as a TV series (Preacher) from the makers of Breaking Bad – it will not be so easy.

Yet Negga, 33, does not appear to be at ease today. She speaks cautiously, in a gentle Limerick lilt, lingering uncertainly over pronunciations (“Is it ‘intransigence’?”… “‘Quotidian’ – is that the word?”) and interrogating her own responses. “I was on the internet last night and I saw that a refugee boat had capsized, and I started thinking: was that yesterday or last week? I mean, people are dying and even those of us who are sympathetic can still go: hang on, which boat was it?” She does, at least, believe that drama can help. “It’s what drew me to acting in the first place. It can crystallise one story but speak for many. I’ve always thought that art can be a balm.” Her accent transforms that last word into “bam” – an onomatopoeic wallop in the face for any doubters.

There can’t be many of those. The past five years or so have seen Negga building spectacularly on the promise of her performance as the pregnant girlfriend of an IRA terrorist in Neil Jordan’s 2004 film Breakfast on Pluto. (“I didn’t know much about her when she came to the casting,” Jordan has said, “but the moment I saw her act, I decided to change the script so that she could appear in the movie.”) She has had a series of eye-catching parts, including Ophelia at the National Theatreand Shirley Bassey in a BBC2 biopic, before playing Raina in Agents of SHIELD. “I loved Raina,” she says. “I envisaged her as someone who had grown up watching femmes fatales and now she was getting to be one herself.” There was a dash of self-sacrifice in the character, not to mention some Cassandra-like clairvoyance. Very Greek. “Yes!” she whoops. “It’s so Greek. All the comic books are. I love the Greeks. There’s no messing around – it’s all do or die with them.”

Right now, Negga has a lot on the go, which perhaps accounts for her restlessness. She was in Limerick the day before our interview for a memorial for her aunt, who died last year. Then it was back to London, where she lives with her partner, actor

actor Dominic Cooper. (They met while appearing with Helen Mirren in a 2009 production of Phèdre.) The day after we meet, she will leave for Albuquerque, New Mexico, where she will spend five months shooting Preacher, a violent and garish TV comic-book adaptation from AMC. Cooper, who has been cast as the lead, will be accompanying her. She is an enthusiastic advocate of taking one’s boyfriend to work. “I highly recommend it.” She gives a lucky-me smile. 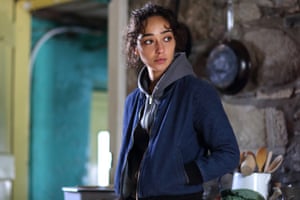 Luck – and smiling, for that matter – are thin on the ground in her new film, Iona. She plays the coiled, pensive protagonist: a woman who flees the mainland under violent circumstances and heads to the small Scottish island where she grew up. The first 10 minutes of the movie elapse without a word; Negga’s sombre, watchful face says enough.

“Ruth is able to convey the pressures and tensions that a character feels in a really truthful way,” says Scott Graham, the film’s writer and director. “I think the scenes that work best are the ones where you see her carrying all that emotional weight. But I also needed someone who can remind you instantly of the girl Iona used to be, and Ruth’s brilliant at that, too.”

But asking Negga about her feelings toward the film brings a frown. “I found it really difficult to watch,” she says apologetically. “I wasn’t prepared for how bleak it was.” These will not be the quotes that appear on the poster. “People are frightened of bleakness, aren’t they? Having no redemption is quite brave, I think.”

The plot of Iona hinges on mistakes made, secrets harboured, resentments left to fester. But Negga rejects my suggestion that the characters’ downfall feels inevitable. “There’s a sense of impending doom in the film,” she agrees, “but I think Iona herself fights against that. I’m interested in the idea that we all start off as these lovely little babies with all this potential but that circumstances mean that we don’t always live the life we should. That’s how I feel about Iona. You see these sparks of joy, these hints of what she might have been.” A few years ago, Negga spent Christmas helping out in a centre for the homeless. “Everyone there had a different story and background. I thought: God, what could you have been if you’d had different options – or any options?”

Outsiders are much on her mind at the moment. When we meet, it is still less than a month since the death of David Bowie. “He was my first crush. From the moment I saw him walking down the stairs in Labyrinth …” She gives a sigh. Last year, she worked with Bowie’s son, director Duncan Jones, on the film version of the computer game Warcraft. “I got to wear really nice gowns and be really strong. I’m hoping that, if they make a sequel, I get to become a ninja or something – a ninja queen.” She turns out to be the sister of one of the white characters, which she feels is especially significant. “I’m brown and my brother in the film is white and blond. I think maybe it was important for Duncan because it’s the same with him and his sister.”

Daughter to an Irish mother and an Ethiopian father, Negga was born in Addis Ababa and lived there until she was four before being raised in Limerick and London. Her father died in a car accident when she was seven. “Partly my feelings of difference were down to having parents of different races. I had quite a scattered childhood. I was Irish in London, because I had my secondary school education there. I never really fitted anywhere. I didn’t feel it was a negative thing and I was never made to feel different – I just knew I was.”

She thinks that is why she is drawn to marginalised characters. “History is written by the winners. My job as an artist is to speak up for those who might be perceived as the losers. Or those who can’t shout. No wonder public-school people always get into politics or acting: they’re taught to shout that much more loudly. That’s such a good skill. It just needs to be made available to everyone. There are a lot of heroes who don’t have loud voices.”

Among those heroes, she includes Mildred Loving, a black woman who fought quietly but tenaciously against anti-miscegenation laws after being jailed by the state of Virginia for marrying her white partner, Richard, in 1958. Named after this pioneer, Negga’s film Loving is about the case, and is directed by Jeff Nichols (Take Shelter, Mud, the forthcoming Midnight Special), co-starring Joel Edgerton. “Mildred shied away from the spotlight completely, but she changed the course of American legal history. All she wanted to do was marry the man she loved. It took nine years. Can you imagine taking on the might of the American legal system? They were poor and fairly uneducated, but they just wanted to be with one another.” She thinks Nichols is the ideal director for the material. “They didn’t set out be activists. So Jeff has made it a story about two people in love. His films champion the everyday people. The many.”

At the Berlin film festival last month, Loving was snapped up by distributor Focus Features, which paid almost $9m (£6m). And the movie will be released in November to capitalise on the awards season race. It’s unmistakably Oscar material. That the Academy will be desperate to advertise its rehabilitation on diversity surely won’t hurt the film’s – or Negga’s – chances. “Diversity needs to operate on every level,” she says. “It’s great that the Oscars have highlighted it, but black actors getting nominated shouldn’t be the only result. There’s so much more that needs to be done.” She once said that Hollywood didn’t know what to do with her, but when I ask what made her feel this, she says it’s hard to quantify. “I don’t really know. I didn’t expect to be handed anything. I think you just know.” She stares into her coffee. “You just know.”

So, has that changed for her? “Definitely – I’m about to go off and play a character who was originally white and blonde and has really big boobs, and none of those things apply to me.” She laughs for the first time. Tulip, her character in Preacher, is the cause for this sudden outbreak of glee. “She’s sort of unforgettable. She has no morals. She’s an agitator assassin, a gun for hire, and she’s written the way male characters are usually written. Conscience is something she buries; obviously she’s damaged. It’s really intriguing. I’d never read a part for a woman like that. They usually have a tender heart or a soft spot for some guy. Not Tulip. You read certain scenes in the script and think: are we allowed to do this? It’s great playing someone unsympathetic and not having to justify her actions.”

Negga has been noticing lately how meagre parts are for women. “I was watching Adam’s Rib with my mum and we both thought: why have we lost these sorts of interesting women? Why have we gone backwards? I need to know. I need to go to a class or something. The dialogue is so confident. And the lack of cutting – ah, you can really enjoy the performances.” I put in a word for All About Eve, which turns out to be one of her favourite films. “I love it so much! Bette Davis is my hero. I’m obsessed with her. I base everything I do on her. She’s one of those people – like Bowie or Jimi Hendrix – who seem to say: ‘Look, you’re OK. You’re cracked, but you’re OK.’”