Home » Features » Sex is a shared responsibility. So why not contraception? Deborah Orr

Sex is a shared responsibility. So why not contraception? Deborah Orr

Women have been putting up with the hormonal side-effects of contraceptives like the pill for decades. It’s time for men to do their bit 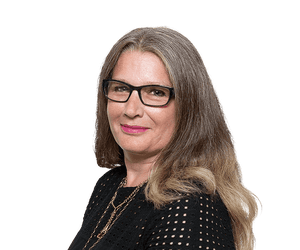 [dropcap]A[/dropcap]n experimental male contraceptive jab has proved just as effective as the pill is for women. Trials were abandoned, however, because side-effects included depression, raised libido and acne. Which is weird, because the pill has similar side-effects – although sometimes it can cure acne. The pill’s other common side-effects include nausea, headaches, breast tenderness, anxiety, weight gain and, sometimes, decreased libido. However, suggesting that the pill isn’t an almost perfect form of birth control tends not to go down very well.

This is understandable. The pill has given women agency over their own lives like nothing else. And women don’t want that great freedom to be tarnished. The advantages of an equally reliable male contraceptive, of course, are much less direct. If anything, the pill freed men from worry about contraception or “getting a girl pregnant” to the extent that an unwanted pregnancy is often looked on as something that’s entirely the fault of the fool who’s enceinte. It’s hard not to look on all those anti-abortionists and morning-after pill killjoys as people determined that foolish women should pay for their own singular mistakes.

Yet a male contraceptive is simply more sensible, in biological terms, than a female one. In her book, Sweetening the Pill, and in numerous articles, Holly Grigg-Spall points out that men have no fertility cycle, while women are only fertile for six days every month. Women take a lot of responsibility for those six days, while the constant risk is not from their ova but from ever-ready sperm.

Grigg-Spall, who is a passionate advocate of raised awareness about the pill’s risks to women, believes that its side-effects are minimised not just because of feminism, which cannot help but see the pill’s advantages as outweighing its disadvantages, because they do, but also because of sexism, which tends to dismiss female problems as trivial and male advantages as important. It’s hard not to agree with her, when comparing this latest research, in which side-effects were given such emphasis, with Danish research published last month that linked the pill to depression and gained little more than shrugs.

Yet it’s precisely because hormonal contraceptives have side-effects, and that these vary from person to person, that a decent male contraceptive would be such a good thing. If one partner finds the side-effects unbearable, then the other can take up the mantle. If one partner has been on contraceptive hormones for a long time, he can give his body a rest and ask his partner to take her turn. A male pill would promote the idea of shared responsibility. Which in matters of sex and reproduction still needs a lot of promoting.

The pill unleashed sexual freedom on a grateful world. It took a while for feminism to realise that this was not by any means always to the advantage of women. Ever since that time, discussion about the male pill has tended to focus on casual sex – whether a woman would trust a man who said he was on the male pill, since a lie wouldn’t leave him up the duff. But the truth is that barrier methods remain necessary for casual sex, to protect against sexually transmitted diseases, whether other contraception is being used or not. Hormonal contraception for both sexes is at its most positive as a goal in stable relationships, where it is so important for responsibility and risk to be shared.

Yet shared responsibility for reproductive freedom still seems so far away. One reason why the development of an effective male contraceptive has been painfully slow is lack of enthusiasm for the idea. Money for research isn’t there because big pharma doesn’t think men will be keen enough. The prospect of more equality, empathy and understanding between the sexes just doesn’t thrill the market.

Unlike Grigg-Spall, who had a terrible time when she was on the pill, and suffered major side-effects such as panic attacks, I’m not against hormonal contraceptives, even if they are risky. I stayed on the pill for a long time, maybe too long, and eventually I couldn’t face it any more. I’d have very much liked it if my partner could have taken his turn too. That alternative wasn’t available. But that isn’t just scientific and pharmaceutical happenstance. I’m troubled by the idea that risks women are routinely encouraged to take are risks that men are not willing also to take. There are related risks that men won’t take either. Vasectomies are at a historically low level. Addressing this particular inequality is a huge step towards addressing many others.

With double as many people willing to take a contraceptive pill, fewer women would have to suffer in silence for the sake of worry-free sex. I’m sure that some men would be happy to take a hormonal contraceptive. But the market tells us that not nearly enough are interested, while research tells us that even when they are, they’re too risk-averse for the idea to be driven forward with enough urgency.

Reliable contraception is a Great Thing for humanity. It’s about time that half of humanity stopped shirking and joined women in engaging in the physical challenges that are undertaken in embracing it.