A piece of history that was nearly lost could become common knowledge.

It all started with a mysterious photograph.

In 2011, Mary Gainer was a historic preservationist for NASA, and she stumbled on a 1943 picture of a thousand people standing in a huge building. Gainer figured that the black men posing in the front were probably machinists, and the rest of the group was mostly white men in suits and ties.

But scattered here and there was something unexpected: Women, some white and some black, in conspicuous knee-length skirts and pompadour hairdos.

Gainer, who worked at Langley Research Center in Hampton, Va., tasked her new intern, Sarah McLennan, to get to the bottom of it. There were too many to be the few secretaries employed then, so who were they, she wanted to know? 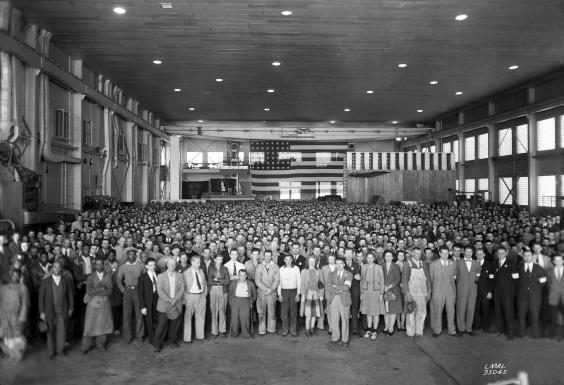 Unbeknownst to Gainer, another person was on a similar hunt — only Margot Lee Shetterly was a step ahead. Shetterly’s father was a scientist who worked at Langley, so growing up in the 1970s and ’80s, she was aware of the history of black women at NASA.

“There are these women and I knew them, and my dad worked with them and they went to our church and their kids were in my school,” she said recently over the phone from her home in Charlottesville. “It was my husband who was like, ‘What is this story? How come I’ve never heard about it?’ ”

This was a special story, she suddenly realized: black women living in Jim Crow-era Virginia hired by NASA to do math and research that would launch men into space.

Shetterly started poking around and linked up with Gainer, whose intern was compiling oral histories from former employees and their families. Shetterly’s book about those math whizzes, “Hidden Figures,” came out last week. In January, a movie version will hit multiplexes with a cast that includes Taraji P. Henson, Octavia Spencer and Janelle Monáe.

And just like that, a piece of history that was nearly lost could become common knowledge.

Shetterly and her neighbors all knew the stories of these women. “Growing up in Hampton, the face of science was brown like mine,” Shetterly writes in her book.

But at the very place where these prodigies were employed, the history was fading.

Everyone knows what a computer looks like: the hard drive, the monitor, the keyboard, the mouse. But in the middle of the last century at Langley (which was until 1958 part of NASA’s precursor, the National Advisory Committee for Aeronautics), it looked different. Women who used pencils and paper to calculate data from wind tunnel tests, among other research, were called computers. The first of their kind were hired in 1935, and their ranks swelled during the labor shortage of World War II. In other fields, as men trickled back from overseas, women returned to more traditional roles at home, but not at Langley. The female computers became invaluable as the needs for aircraft advancements gave way to a different kind of battle: beating Russia to the moon.

The women who had these jobs may not have felt remarkable. They were just happy to have work that paid better than the alternatives — teaching and nursing. The jobs were classified as “subprofessional,” even though they entailed specialized math skills.

One such woman was Katherine G. Johnson. At 98, she still lives in Hampton, and has emerged as the most high-profile of the computers. In the last year, she’s won the Presidential Medal of Freedom, saw a building named after her and had a bench dedicated in her honor. On her birthday, in late August, #HappyBirthdayKatherineJohnson started trending on Twitter. In a few months, Henson, an Oscar nominee, will play her onscreen.

Like a lot of the other computers, Johnson studied math in college. She was also one of three graduate students to desegregate West Virginia University in 1940, but marriage and a family derailed her plans for an advanced degree. At NASA, she worked on the life-or-death task of determining launch timing. Her calculations helped propel Alan Shepard into space and guided him successfully back to Earth; they landed Neil Armstrong on the moon and brought him home.

She never talked about work much, her daughter Joylette Hylick said recently.

“To come home and start talking about complex equations wouldn’t go over with teenagers,” Hylick explained. Plus, “we had activities — church, sports, music lessons, the whole nine, so it was quite a full life. She was not a stay-at-home but she also was not a workaholic in the sense that everything revolved around that.”

When asked about her accomplishments, Johnson, a prodigy who graduated high school at 14, tends to deflect in every interview. Shetterly says Johnson told her again and again, “I was just doing my job.” (Johnson was unavailable to comment for this story.)

It wasn’t until well into adulthood that Hylick realized the importance of her mother’s job.

After all, she was a trailblazer amid rampant discrimination. The earliest group of black women who worked at NACA were segregated from another computing pool of white women, and they had to use different bathrooms. At lunch in the cafeteria, they were relegated to a table with a white cardboard sign that read “colored computers.” One woman, Miriam Mann, snatched the sign off the table and hid it in her purse, depositing it at home. At first, replacements would materialize, but when Mann kept taking them, they eventually stopped appearing. It was the first of many victories.

Now seems like the right time for this history to reemerge. “There’s been a movement in the last couple of decades to diversify the history of computing,” said McLennan, the former intern, who is now a visiting assistant professor at Virginia State University. “The earliest histories of that kind of thing were about innovators or big companies, but it didn’t necessarily look at the social aspect.”

The film’s producer, Donna Gigliotti, credits the current interest in encouraging women to pursue science and math for helping get the movie made so quickly. It’s rare for a producer to option a book based on only a 55-page proposal, but that’s what Gigliotti did.

“Really, you can feel it in the zeitgeist,” Gigliotti said, and the rapturous response to the trailer confirms that.

Whatever the reason, Shetterly is happy that people will know not just about the John Glenns of the world, she said, but the whole team that helped him get where he was going.

“We want the big stories, of course, of the great men, but there’s as much drama and interest and lessons to be learned in actions that people like us take on a daily basis,” she said. “History happens as soon as I pick up my coffee cup — it happened 30 seconds ago. It’s history.”